For my Ted Scripps Fellowship in Environmental Journalism, I’m focusing on projects related to sustainable farming. I’ll be writing several articles on this subject over the course of the next nine months, and have begun with one for Earth Island Journal on how cities facilitate or impede urban farming. Here’s an excerpt:

Across the US, Cities Struggle to Figure Out How to Accommodate Urban Farming

Sacramento has worked diligently over the past two years to brand itself as America’s farm-to-fork capital, hosting local food festivals, wine tastings, and gala dinners featuring the city’s premier chefs. Tickets for this year’s dinner, at $175 dollars each, sold out in five minutes. The Sacramento Convention and Visitors Bureau has even organized a cattle drive and tractor parade through downtown.

Sure, nearly 1.4 million acres of farmland exist around the city, which is located in California’s vast and fertile Central Valley region, and the climate is amenable to growing produce year-round (drought complications notwithstanding). But there are no urban farms in Sacramento. The closest and most prominent urban farm, the 55-acre Soil Born Farms, exists outside the city limits.

Here’s an excerpt from my article, “Think You Know What a Farmer Looks Like? Think Again,” for YES! Magazine’s website.

When Lindsey Morris Carpenter was a college student studying art in Philadelphia, she never expected that, just a decade later, she would spend most of her days fixing up tractors, turning piles of manure, and corralling chickens.

But that’s precisely what she’s doing. Carpenter, 29, dropped out of school in 2004 and returned to her home state of Wisconsin, where she found a job on a vegetable farm. She went on to apprentice at a larger operation in suburban Chicago and eventually secured employment at an urban farm on the city’s south side, teaching previously incarcerated people how to grow food. 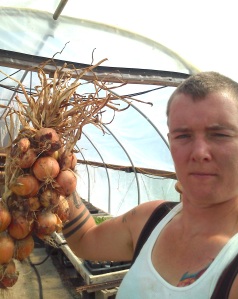 By 2007, Carpenter had decided she wanted her own piece of land to farm, so she and her mother, Gail, bought 40 acres in south central Wisconsin and got down to business—an opportunity she’s grateful for since she’s aware that not everyone has access to the resources that allowed her to purchase this land.

Today, Carpenter’s certified-organic operation, Grassroots Farm, grows fruit, vegetables, hops, and herbs; she also sells pesticide-free cut flowers and eggs from the farm’s chickens. Being as environmentally sustainable as possible is paramount to Grassroots’ operations, Carpenter says. So, too, is a commitment to provide healthy, fresh food to local people regardless of the size of their bank accounts.

… READ THE REST OF THE ARTICLE HERE

Here we are right in the middle of Monsanto land. Or, “the belly of the beast,” as Denise O’Brien, a leader of the modern sustainable agriculture movement ranked with women from across the United States, says of being in Des Moines. Industrialized, chemical-laden farming surrounds us. Many of us drove past “the rape and pillage of the land” on our way here today. But we are also in the Hawkeye State of Iowa, a place where women own half the farmland.

Women converged in Des Moines, Iowa, for a conference on transforming food systems.

Farmers, food industry workers, policy wonks, pesticide watchdogs — 400 women and a few intrepid men — have come from 20 U.S. states to discuss ways to transform a disastrously broken global food system, and to explore how some local food systems successfully work. What lessons do they have to teach us? And I’m here, too, a journalist hoping to share their stories. We have assembled in the expansive ballroom of a hotel/conference center in early November “because we believe in gender equity in food systems and agriculture,” says Leigh Adcock, director of Women, Food & Agriculture Network, the nonprofit group that organized this conference. “We don’t just want to link women, we want to empower you.”

Back in the early 1990s, a handful of Iowan women were preparing for the United Nations’ Fourth World Conference on Women in Beijing, and they sought case studies of women working in agriculture. But they couldn’t find any. The U.S. Census of Agriculture didn’t even include women until recently. They continued to ask around, and gather research from those female farmers they could find. “No one had ever asked them questions before about their dreams for their land,” O’Brien says.

What O’Brien and her comrades found were different approaches to farming and philosophies rooted more in the inherent value of the land and the need to conserve. What they found are women now on the leading edge of this transformative movement for a better food system, according to keynote speaker Danielle Nierenberg, cofounder of Food Tank.

Nierenberg spent two years traveling to 35 countries in Asia, Latin America and sub-Saharan Africa and what she determined was that hunger, obesity and poverty could be fought, while protecting the environment. “I’m convinced that how things are isn’t how they have to be,” Nierenberg tells the audience gathered in Des Moines. Yes! I think. I believe that, too. And I know all these people around me believe this same powerful revelation at this precise moment. If we didn’t, we wouldn’t be here.

Nierenberg presents five strategies for a better food system. We need to stand with family farmers — 500,000 family farmers around the world contribute to the livelihood of 2 billion people — disenfranchised populations and food workers. We need to stop wasting so much food; 40 percent of the global harvest never reaches people’s stomachs and one-third of food in the United States is thrown away because of overbuying, misunderstanding sell-by dates and the improper storage of food. We need to increase urban agriculture, improve the diversity of diets to ward off malnutrition in developing countries — an obstacle to economic development — and support sustainable farming. Agriculture is leading to 80 percent of deforestation around the globe and uses 70 percent of fresh water. Industrial agriculture, she tells us, is like the Titanic in reverse: complex, a marvel in invention, thought to be invincible but heading toward its demise.

Turns out I love Des Moines, in fall (not winter).

Two days later, Kari Hamerschlag, a senior food and agriculture analyst with the Environmental Working Group, tells the audience that reading Frances Moore Lappe’s “Diet for a Small Planet” 30 years ago prompted her to move from Vermont to California to work on food policy, and she hasn’t looked back. There’s plenty of bad news to dwell on, she says. We’re ruled by a profit-driven industrial food system and all the positive change that has been accomplished — more community supported agriculture programs, more women farmers, more organic acreage, more farmer’s markets — has been done without policy support. Twenty-four percent of Americans are food insecure, compared to 9 percent in China. Fewer corporations are controlling more of the food system, and the way we grow our food is destroying our natural resources. “For too many of these problems, our public policy is making the situation worse not better,” she says.

But this WFAN conference is not about bemoaning problems. That’s not what these women do. They do what needs to be done. They take care of business, and work on solutions. “Don’t despair and don’t retreat,” Hamerschlag tells the group, smiling. “The stakes are really high and we need you more than ever. And there’s reason for hope.”

I wrote an article about going on a farm and wine tour through Placer County with the company Local Roots, which aims to connect consumers with farmers. It’s all part of that farm-to-fork movement you’ve probably been hearing about. The article appears in the September issue of the Granite Bay View. Read it here. (Photos by Cole Allen). 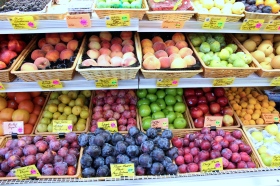