Whenever I decide to write about water, I always think it’s such a good idea. Then the real work begins — breaking down and trying to make sense of the complexity around this limited natural resource in the American West, and telling a good story. And I’ll wonder, why did I do this to myself?! Writing about water isn’t easy. I took a solution-oriented approach in this story for Comstock’s magazine. Photojournalist Sonya Doctorian took the photos and created the video. 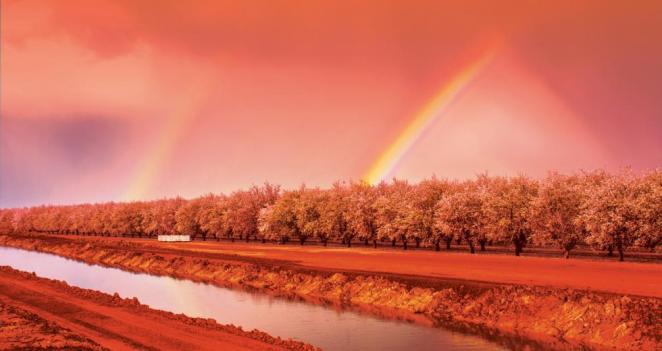 A rainbow over an almond orchard in California’s Central Valley. Photo by Sonya Doctorian.

Sacramento water agencies work together, adapting to drought and planning for a future of growth

Dr. Jay Lund, director of the UC Davis Center for Watershed Sciences, is the godfather of research on the Sacramento-San Joaquin Delta. When he says it took John Sutter eight days to wind his way from San Francisco Bay through the Delta to find the narrow Sacramento River in 1839, you can bet that’s the truth. Not until 1913 was the mouth of the river dredged to make it a mile wide. Grizzly bears roamed the wildness, feasting on an abundance of native fish, until they were hunted to local extinction. Today in the Delta, the largest estuary on the west coast of North America, only remnants remain of the natural landscape before it was irreversibly altered at the hands of people.

The Delta is a system of canals. In places, you can stand on a man-made levee with high water on one side and sunken land on the other. For 7,000 years, sediment accumulated to form deposits of organically-rich peat soil, but the last 170 years of farming have undone this natural process. About 2,300 dump trucks worth of soil is lost per day, oxidized as carbon dioxide and all told, about half of the Delta’s soil material is now gone, says Curt Schmutte, a civil engineer who specializes in Delta issues. We named plots of land in the Delta “islands,” but scientists refer to them — the majority below sea level — as “holes.”

I’m with a tour group on a hot September afternoon, and we hold onto our hats and brace ourselves as the boat tears through the water at 40 miles per hour, past invasive water hyacinth, tules, fishermen, houseboats, farmland and cattle. The Delta accumulates water from California’s largest watershed and acts as the hub of the state’s water supply system, linking water from the north to the two biggest water projects, which play a major role in sustaining the world’s sixth largest economy and much of its industry, agriculture and 39 million people.

But the Delta exists under unrelenting pressure: from land-use change, population growth, nutrient pollution from wastewater treatment plants, earthquakes, agriculture, sea-level rise and more. Even with money, there’s no silver bullet to fix this ecosystem — but there are plenty of battling sides. “It’s like a game of chicken,” Lund says. “How do you break a game of chicken?”