The Fort Knox of Food

In October, I visited the National Center for Genetic Resources Preservation in Fort Collins, Colorado. This “Fort Knox” of gene banks is part of a system that safeguards the American food supply. In November, I checked out another piece of that system — the Wolfskill Experimental Orchards in Winters, California. Read more about gene banks in my Newsweek feature story, and check out an excerpt below.

Inside the freezer vault at the National Center for Genetic Resources Preservation. (Photo by Sena Christian) 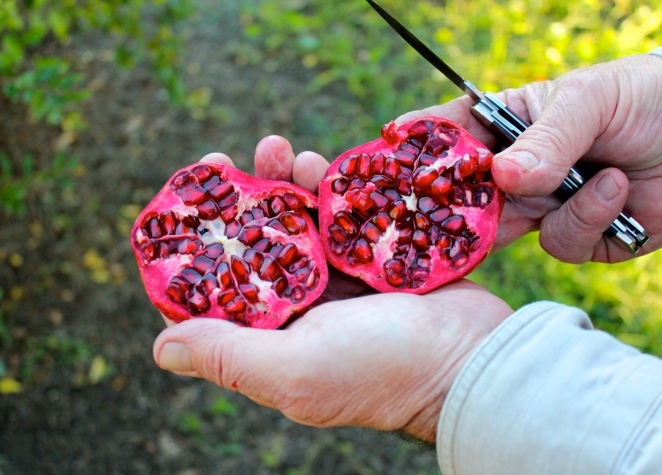 One of the many pomegranate varieties grown at the National Clonal Germplasm Repository. (Photo by Sena Christian)

The Fort Knox of Food

In the bowels of an unassuming building in the Colorado Front Range is a vast library of plant and animal material that could keep humanity thriving for centuries to come.

In 1948, botanist F.W. Went began a modest experiment that has since grown and grown into what is now a massive science project networked across the globe with ambitions of saving humankind. But its initial goal sought to answer a remarkably simple question: How long do seeds survive?

The year the project launched, Life magazine wrote about the “wonderfully unhurried” experiment intended to last 360 years, complete with a photo of Went, a California Institute of Technology professor at the time, standing behind shelves lined with 2,400 slender glass tubes holding 120 types of dried seeds from California-native plants.

Sixty-seven years later, Went’s seeds reside in a beige multistoried building off the quad of Colorado State University in Fort Collins. Its blandness masks the significance of the project it houses. This “Fort Knox” of gene banks—the nickname for the National Center for Genetic Resources Preservation (NCGRP) of the U.S. Department of Agriculture (USDA)—is designed to safeguard the American food supply from the numerous threats posed by a rapidly changing planet. The stakes couldn’t be higher. Droughts, floods, sea-level rise, ocean acidification and the resulting hunger, malnutrition and mass displacement of people will likely become more severe in coming years because of climate change. And though poor people in developing countries will be on the front lines, even wealthier nations like the U.S. are going to have to come to terms with the urgent need for action.

Additionally, the world is losing biodiversity at an alarming rate. Many believe Earth has entered its sixth mass extinction: a human-induced and accelerated decline of animal and plant species of massive proportions. What remains needs to be kept alive and available for breeding. Otherwise, the material could be lost forever—and when crop and livestock diversity is lost, so is our food supply’s resiliency to environmental threats. We can’t let that happen because the world’s population is projected to increase to nearly 10 billion by 2050. And that’s a lot of mouths to feed.